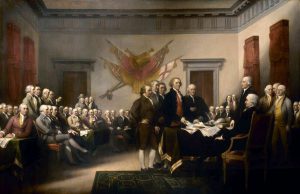 John Trumbull, The Declaration of Independence, 1817

Political Theory is part of Political Science which evalutes and describes different concepts and principles of politics such as democracy, justice, freedom, rule of law, rights, international relations, and equality. What should the foundation of our society be? How can we organize and approach society? What political values does the state have?  How can we implement political values through institutions? These are only some of the key questions political theory addresses.

Thomas Hobbes peruses how our societies would look without political institutions and rule of law. He differentiates two kinds of states. First, in the state of nature all people are equal to satisfy their own needs, the so-called self-interested beings. This state is ruled by permanent war: „Every man against every man“ („bellum omnium contra omnes“). Second, the State of Government is based on moral law and reason. In this state there is some kind of „contract“ between individuals and the State which provides the rule of law. For Hobbes, with this „contract,“ there is no more war– „every man against every man.“

Through political theories and philosophy, we can better undestand essential relationships between political events and institutions. 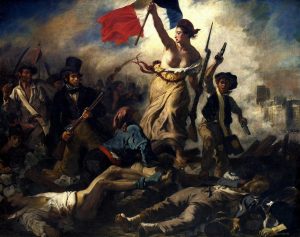 Some thoughts of political theorists, philosophers, and statesmen:

“I am increasingly persuaded that the earth belongs exclusively to the living and that one generation has no more right to bind another to it’s laws and judgments than one independent nation has the right to command another.”

“Without freedom of thought, there can be no such thing as wisdom; and no such thing as public liberty without freedom of speech; which is the right of every man as far as by it he does not hurt or control the right of another; and this is the only check it ought to suffer and the only bounds it ought to know…. Whoever would overthrow the liberty of a nation must begin by subduing the freedom of speech, a thing terrible to traitors.”

“Liberty cannot be established without morality, nor morality without faith.”

“As I see it, only God can be all-powerful without danger, because his wisdom and justice are always equal to his power. Thus there is no authority on earth so inherently worthy of respect, or invested with a right so sacred, that I would want to let it act without oversight or rule without impediment.”

“The conception of human rights based upon the assumed existence of a human being as such broke down at the very moment when those who professed to believe in it were for the first time confronted with people who had indeed lost all other qualities and specific relationships except that they were still human. The world found nothing sacred in the abstract nakedness of being human.”

“What difference does it make to the dead, the orphans and the homeless, whether the mad destruction is wrought under the name of totalitarianism or in the holy name of liberty or democracy?”

“The heaviest penalty for declining to rule is to be ruled by someone inferior to yourself.”

“… Our purpose in founding our state was not to promote the happiness of a single class, but, so far as possible, of the whole community. Our idea was that we were most likely to justice in such a community, and so be able to decide the question we are trying to answer. We are therefore at the moment trying to construct what we think is a happy community by securing the happiness not of a select minority, but of a whole.”

“The State which we have founded must possess the four cardinal virtues of wisdom, courage, discipline and justice … Justice is the principle which has in fact been followed throughout, the principle of one man one job, of ‘minding one’s own business’, in the sense of doing the job for which one is naturally fitted and not interfering with other people.”

“The only stable state is the one in which all men are equal before the law.”

“… By nature man is a political animal. Hence man have a desire for life together, even when they have no need to seek each other’s help. Nevertheless, common interest too is a factor in bringing them together, in so far as it contributes to the good life of each. The good life is indeed their chief end, both communally and individually; but they form and continue to maintain a political association for the sake of life itself. Perhaps we may say that there is an element of good even in mere living, provided that life is not excessively beset with troubles. Certainly most men, in their desire to keep alive, are prepared to face a great deal of suffering, as if finding in life itself a certain well-being and a natural sweetness.”

“During the time men live without a common power to keep them all in awe, they are in that conditions called war; and such a war, as if of every man, against every man.”

“The deterioration of every government begins with the decay of the principles on which it was founded.”

“In the state of nature… all men are born equal, but they cannot continue in this equality. Society makes them lose it, and they recover it only by the protection of the law.”

“A nation may lose its liberties in a day and not miss them in a century.”

“Even philosophers will praise war as ennobling mankind, forgetting the Greek who said: ‘War is bad in that it begets more evil than it kills.’ ”

“Moral principle is the foundation of law.”

“Justice is the first virtue of social institutions, as truth is of systems of thought.”

“A theory however elegant and economical must be rejected or revised if it is untrue; likewise laws and institutions no matter how efficient and well-arranged must be reformed or abolished if they are unjust.”

“There are two kinds of laws, laws of nature and laws of right. Philosophy cannot teach the state what it should be, but only how it, the ethical universe, is to be known. The state is the actuality of the ethical Idea.”

“The work of an intellectual is not to mould the political will of others; it is, through the analyses that he does in his own field, to re-examine evidence and assumptions, to shake up habitual ways of working and thinking, to dissipate conventional familiarities, to re-evaluate rules and institutions and to participate in the formation of a political will (where he has his role as citizen to play).”

“What is soft power? It is the ability to get what you want through attraction rather than coercion or payments. It arises from the attractiveness of a country’s culture, political ideals, and policies.”

“Smart power is neither hard nor soft. It is both.”

“Man is condemned to be free; because once thrown into the world, he is responsible for everything he does. It is up to you to give [life] a meaning.”

“Freedom is what we do with what is done to us.”

“Optimism is a strategy for making a better future. Because unless you believe that the future can be better, it’s unlikely you will step up and take responsibility for making it so. If you assume that there’s no hope, you guarantee that there will be no hope. If you assume that there is an instinct for freedom, there are opportunities to change things, there’s a chance you may contribute to making a better world. The choice is yours.”

“History is written by the victors.” 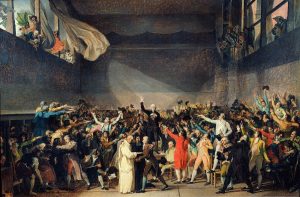