“The unexamined life is not worth living”
Socrates

Everybody who considers himself “an educated person” should know something about history, the history of his own country, its political, cultural and economic development as well as the European history and the history of the world. It is absurd to demand the knowledge about the great conquerors and warriors, and remain completely ignorant when it is about the great creators who contributed to development of European culture. The inheritance, left by the great painters and artists, has got the value that has not been decreased in time, after the death of its creators. Also, the great scholars like Socrates, Plato, Aristotle, Kant, Hegel and many others, enriched the European culture and contributed to its development. With their death, the need and interest for their work has not disappeared, but on the contrary, nowadays it represents the key marker of European identity that reflects in every field of knowledge: from everyday life to economy, politics and art.

During its history, which already lasts 2500 years, European philosophy has been changing, in its contents as well as in its functions. Since philosophy tended to explain the society in which it existed, thus socio-historical circumstances were changing philosophy. That is the reason we cannot give the definition of philosophy that would have an obligatory meaning which could be adopted by everybody. The notion of philosophy originates from the ancient Greek word philos (friend) and sophia (wisdom). Therefore, the notion of philosophy could be translated as love towards wisdom or aspiration towards knowledge. According to the papers of Diogenes Laertius and Cicerone, the word philosophy was first used by Pythagoras, and, according to others, by Heracleitus (fragment 35: “For the people who kiss wisdom, it is worthy to know very much”). Philosophy is not the love towards any kind of knowledge, but to the one that includes the first principles (arche) and, on their bases, one proves the existence of other knowledge. What does philosophy examine? It strives to examine:

Philosophy is a brand new manner of thinking that occurred in the ancient Greece in the 6th century BC. “When Greece is mentioned, every educated man in Europe is being overcome by the feeling as if it is his own country” (G.V.F. Hegel, “The History of Philosophy”). Nevertheless, philosophy, as an aspiration towards wisdom, reached its peak in the eastern countries (between 8th and 6th century BC), India, Persia, China considerably before the beginning of philosophy in the ancient Greece. Each of these cultures indirectly influenced the culture of the ancient Greek people. Mythical and religious tradition, which included the roots of wisdom in itself, was being carried from generation to generation through the centuries. The origins of philosophy in India were given in Vedas (knowledge) and were composed in the glory of gods, Sun, water and fire. They were accepted as studies of ancient scholars like Buddha was. In China, Confucianism was developed (by Confucius) and Taoism (by Lao Tzu). In Persia, Zarathustra founded monotheistic religion with distinguished dualism. Something that the eastern philosophy differentiates from the Greek philosophy is that it does not have critical rationalism which would raise itself above religious and mythical studies, and what has important meaning in the Greek philosophy.

In the beginning, religion attempted to give answers on philosophical questions in the ancient Greece. Those religious explanations were being carried from generation to generation in the form of myths (mythos – narration, talk). Myths should explain why this life was such as it was. The Greek mythology was systematized by Homer (“Iliad and Odyssey”) and Hesiod (“Theogony”). Hesiod describes the beginning of the world as Chaos, then, Gea (the Earth) appears, mother of every being. Tartar is at the bottom, the Gea’s and Eter’s son. Afterwards, Eros appears as the principle of strength and movement. From Chaos, Darkness and Night appear and, from Darkness and Night, Light and Day occur. From Gea, Sky, Mountains and Sea arise. Supreme Greek god is Zeus – the father of all deities. Greek philosophers tried to prove that one cannot rely upon myths. They criticized Homer’s study about gods because they were too similar to people. One of the philosophers who criticized myths was Xenophon who said: “People created gods according to their own image. They believe that gods were born and had bodies, clothes and language as ourselves”. Philosophers should be differentiated from sages. Sages are not philosophers yet because they only summarize practical life’s wisdom, while philosophers are examiners and explorers of wisdom. Exactly when philosophy appeared, Greece started to found many towns in colonies in southern Italy and Minor Asia. There, slaves did physical work, and free citizens were occupied with politics and wars. Free citizens started asking questions with no concern about existing myths. The goal of the first Greek philosophers was just to find explanations of natural processes based on reason.

How did philosophy appear? In his work “Theaetetus” Plato says that philosophy started with wonder (thaumadzein). Being amazed meant the acceptance of personal ignorance. Man does not accept empirical world as it is, but he wonders and questions its base: “Why does something exist?”, “Why do we live at all?”. Besides the wonder, another source of philosophy is doubt (skepsa). In the basis of philosophical wonder and doubt is desire for realization of truth (Greek: aletheia). Although, the philosophical questions concern everybody, all people do not become philosophers. For many reasons, most people are occupied with everyday problems that sheer wonder and questioning are repressed in front of life. While children always discover something new in the world, adults experience the world as something common. According to it, philosophers behave and experience the world like children. No philosopher ever succeeded to adapt completely at the world he lived in. He stands before the world like in front of the great mystery.

“Philosophy is its time expressed in thoughts”
Hegel

“The beginning and ending of every philosophy is freedom”
Schelling

“Philosophers do not grow like mushrooms from the soil, they are fruits of their age, their people, whose most subtle, most precious and most invisible juices circle in philosophical ideas”
Marx

“Philosophy is, above all and first of all, asking questions”
Kosik

“We philosophize always in fear of madness”
Derrida

WHAT ELSE IS PHILOSOPHY ABOUT?

“Dare to think” (sapere aude) Kant said, speaking about enlightenment. If we want to understand the world we live in, processes that occur in nature, society and motives which determine our personal opinion, then, we need philosophy. The great virtue of philosophy is that it does not teach us what to think, but how to think. Every man has his own “philosophy”. Philosophy is the way in which we observe and interpret our world. We believe that we know what is good, and what is evil. However, when wars happen, many would point at human nature and inevitability of war in our world. Those who are devoted to religion say that god has created man in the way he is. Why would god create a man with evil in himself? Is the human nature evil by itself? The answers on these and other questions people try to give when some complete change in their life force them to reconsider ideas and values present until now. Everyone, who wants to understand life, should raise his mind above everyday existence. That is the only way for a man to accomplish his role in life and realize himself as rational and humane being. Because of that, man should put an effort in understanding of his life and world.

Philosophy made the authentic turnabout in development of human thinking. The originators of that turnabout were the ancient Greeks who had discovered, before Columbus, that the Earth is round; they hugely contributed to mathematics, geometry, mechanics and many other branches of human activities. Nowadays, philosophy does not deal with the same problems it used to deal in the past. The role of philosophy in studying nature of universe and life was taken over by natural sciences, while study of human soul was taken over by psychology, study of society by sociology which became independent of philosophy. Today, philosophy is divided: one that prefers turning to the natural sciences and their methods and, another, that considers philosophy to deal with traditional questions (What are man and world? What is the sense of life?), in other words, to study reality on the whole. Although divided, it still remains linked with related sciences which arised from philosophy (history, politics, literature, law etc.).

The advantage of philosophy, comparing with other fields of knowledge, is that it represents intellectual challenge which tends to explain the values of life and world as a whole. Man is the only being aware of his limitations. That awareness could motivate man to try to answer eternal philosophical questions. To be philosopher means to be of a bold spirit and able to look truth in the eye. 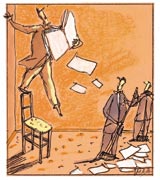