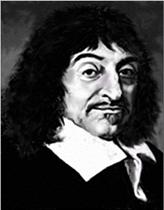 One of the courses of epistemology:

The aim is that students become familiar with Descartes’ epistemological problem that refers to studying, from the word method (Greek: methodos – way, manner). Descartes takes over the achievements of the exact natural sciences and mathematical method. He emphasizes the role of subject in process of realization and desire for the great certainty. Descartes explains the characteristics of his method in the book “Argument about Method”. What requirements should man satisfy in order to reach truthful realization? What do the rules of method consist of? Why does Descartes take over the method from mathematics? What is the aim of the method? Why is suspicion a crucial point in Descartes’ philosophy? Through doubt Descartes comes to self-consciousness. Explain the attitude: “Cogito, ergo sum”. How does Descartes prove the existence of god?