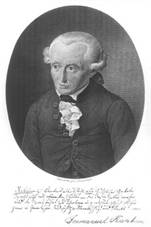 One of the courses about the history of modern philosophy:

The aim of the course is that students become familiar with Kant’s life (1724-1804) and his basic philosophical suppositions. In which historical circumstances does Kant’s philosophy occur? Why is Kant’s system of transcendental idealism one of the most comprehensive philosophical systems in the history of philosophy?
Explain Kant’s three key philosophical questions:

Kant tended to overcome the restrictions of empiricism and rationalism. Our knowledge of outside world does not start with sensual experience like John Lock claimed, but Kant considered that sensual experience was conditioned by our powers of knowledge (sensuality, sense and mind). Kant was looking for that apriori (general and necessary). That is Copernicus’ turn in Kant’s philosophy: subject is no longer passive in receiving impressions from the outside world, but his powers of knowledge condition the subject of perception. Point out to students how a man understands the perspectives of our consciousness. Why are space and time sensual apriori forms for Kant? What is the Schopenhauer’s attitude towards that question? What is the Kant’s “transcendental idealism” or “empirical reality”? Under intellect, Kant takes the power of comprehension, judgment and deduction. In that sense, Kant establishes the distinction among four kinds of judgments: apriori, aposteriori, analytic and synthetic (explain the difference). Why are sensuality and reason constitutive elements of our experience? Why does mind (ideas of god, freedom and immortality of soul) have only regulatory function? What is the essential difference between reason and mind for Kant? Is metaphysics, as a science, possible for Kant? Explain the concept of transcendence (the thing by itself – ding an sich). According to Kant, we can perceive only noumenon (appearance) of some thing (the thing for itself – ding fur sich), but not the thing by itself. With Kant’s restrictions of knowledge one gets more possibilities to believe, which is the basis for metaphysics. What is the Kant’s apriori principle in “The Critique of Pure Reason”? What is beauty for Kant? What is the relation between beautiful and sublime? How does Kant’s philosophical system relate to other philosophical systems of German idealism?